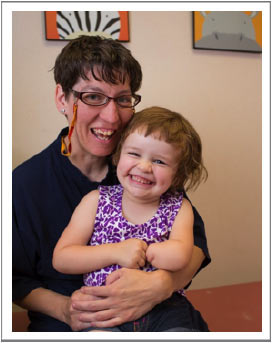 Our story:
Our daughter, Jerika, was born with her left arm missing, just below the elbow. She was about two and a half when Dr. Kara Somers from Bon Secours Family Medicine, recommended POWELL.

How POWELL helped:
They’ve helped her to be more independent, to put on her own clothes, and taught her how to put on the prosthesis and open and hold items with it. She’s now using her bike, with training wheels. They have also helped us by directing us to a support group.  They’ve been helping us understand our daughter and what she’s going through. It’s helped her understand she is different, and that there is absolutely nothing wrong with that. We’ve been able to see the prosthesis for different age groups, so we can see what she will have available as she grows up.

Why we love POWELL:
The atmosphere for one thing. They’ve been supportive in helping Jerika, and getting her involved with kids like her. She feels safe and secure in the environment, and is happy with the practitioners and the staff, like Mike and Christy.

POWELL in a word or two:
Independence. Awesome. 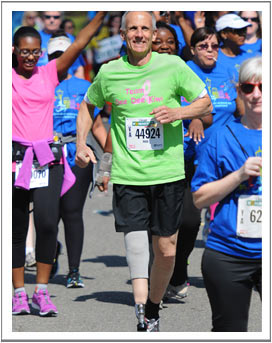 My story:
I was born with no fibula in my right leg, a congenital defect called Fibular Hemimelia. I wore a brace until I was ten, and then my orthopedic surgeon and my parents agreed it was best to amputate the leg below the knee–to help keep my spine straight–and since then I’ve had a prosthetic limb.

In 2012 when my old prosthetics practitioner sold his business, he recommended I come to POWELL. I came in when the last limb I had was becoming uncomfortable. I also wanted to get a leg to help me be more active. I wanted to run. I wanted to run with my wife who is a marathoner.

How POWELLhelped:
The first day I tried on the new socket POWELL recommended, I started running circles in the room. It fit that good from the get-go. Within 15-20 minutes, Joe, my practitioner, made minor adjustments to the first mold/check socket. They used it to build the full limb, and it fit so well.

I ran on that limb for several months. Once, after I finished a seven-mile practice run, I asked if there was anything to prevent perspiration from getting inside the prosthetic limb, and Joe found me a vacuum system called LimbLogic®. I wore it on a nine-mile run, and while the outside was wet with sweat, the inside was dry. Then I asked about getting a more flexible foot. They found me a running foot (Flex-Run with Nike Sole) and it was like night and day. I get some bounce out of this foot when I put energy into it.

I joined a marathon training team this year, and my wife who is recovering from breast cancer is training with me now. With this new technology, I don’t feel I have a disability. I don’t think we have limitations. I like to run. Out there, nobody can stop you.

Why I love POWELL:
What’s not to love? They are definitely customer service oriented. I like their mission statement. I thanked them for improving the quality of my life. That’s their mission. They did it.

POWELLin a word or two:
Quality of life. Even though that’s three.

We have provided freedom for our patients since 1922. Our years of professional experience, craftsmanship, and technology are what enable us to provide the benefit of mobility and independence to our patients. With the experience, craftsmanship, and technology of POWELL we can say we have “Tried. Tested. Perfected.” all of our products over the years.